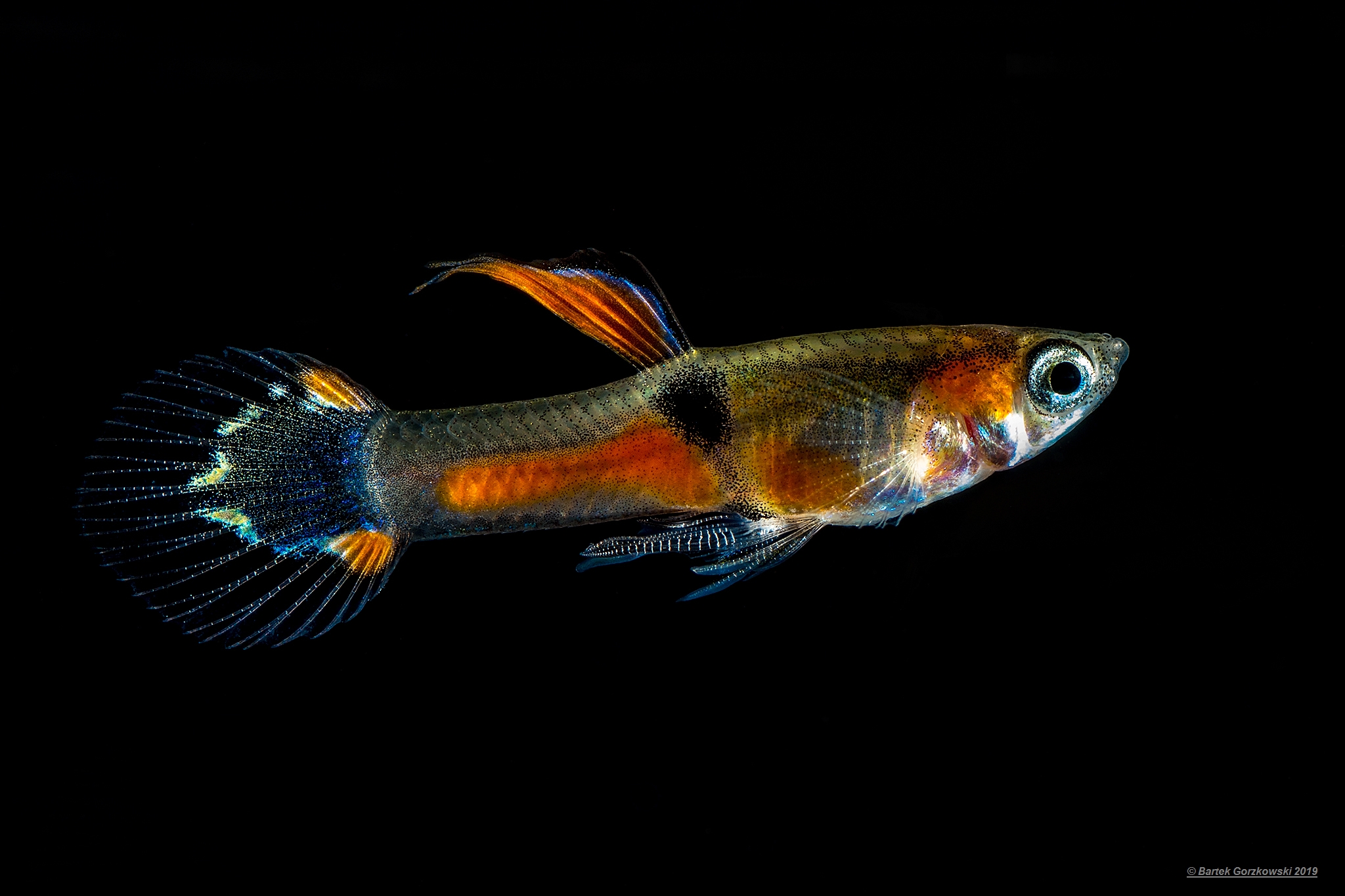 For many years of my adventure with aquaristics, I had different species of fish. However, I always went back to the livebearers, which are still among my favourite fish along with bettas. That’s what happened 3 years ago, when two breeding varieties – Endler’s livebearer (Poecilia wingei) red scarlet and blonde – came to my tanks. Until 10 years ago, these varieties were genuine rarity. Only classic Endler’s black bars could be found in pet shops. Today, finding an original variety of black bar in the shop is nearly impossible. If you happen to be that lucky you should think about participating in a lottery, the winning ticket might be yours.

As you know, aquaristics has developed a lot over the last years, so 3 years ago the two varieties I bought were nothing spectacular. So I started browsing the livebearers forums, theme groups and blogs of foreign aquarists. I also managed to get to the website of a Polish aquarium hobbyist, who described wild varieties of livebearers. And that’s how I got the first wild phenotype of these fish. You could say it was the beginning of my project called “Endler’s room”.

Over the last three years I have managed to get in touch with many hobbyists from France, Spain, Italy and aquarists from Central and South America. Among them are such aquarists as Adrian Hernandez, Robert Nicolas, Philippe Voisin. These are people who have travelled to Venezuela in person to catch and describe the wild phenotypes of Poecilia wingei. Philippe Voisin is my greatest authority when it comes to these fish. It is thanks to him that I have the honor of having many unique varieties of this species.

The first explorer of this species was Franklyn F. Bond. Scarce publications on this subject come from the late 1930s. It was not until 1975 (about 40 years after the first discovery) that John Endler, who again caught and described the species, made further references to this fish in official publications. The geneticist Dr. K. Kellman, in spite of significant similarities to wild guppies (Poecilia reticulata), classified the fish caught by John Endler as a separate species from the genus Poecilia and named it Poecilia endler in honor of the explorer. The name was in use until 2005, when, after the publication of an article by Fred Poeser, Michael Kempkes and Isaac Isbrücker, the scientific name was changed to Poecilia wingei (in honor of the Danish biologist Øjwind Winge).

The natural habitat of Endler’s livebearer (Poecilia wingei) is Venezuela. The state of Sucre in the northern part of the country specifically. Endler’s livebearer lives in floodplains, slow flowing streams (often with slightly salty water), canals (even heavily polluted with sewage) and drainage ditches in the Campoma (Laguna de Campoma and Rio Oro, to to the south-west from it) and Cumana (Laguna Los Patos, Laguna de Malagueña) and Laguna Buena Vista (lagoon near Las Aguas de Moises resort).

The waters in which Endler’s livebearer lives are often green from the algal bloom, as the first explorers described in their publications. At the bottom of these bodies of water there is a layer of detritus, organic remains, tree branches and leaves. Plants include water hyacinth (Eichhornia crassipes), rigid hornwort (Ceratophyllum demersum), floating fern (Salvinia natans), smooth frogbit (Limnobium laevigatum), longleaf pondweed (Potamogeton nodosus) or plants of the genus Elodea.

Names and varieties, what is this about?

Endler’s fish or guppy? According to the current systematics, Poecilia vingei is a separate species of the genus Poecilia. Also according to the current species systematics the correct name is Endler’s livebearer. So what are the differences between Poecilia reticulata (rainbow fish) and Poecilia wingei (Endler’s livebearer)? Both belong to the genus Poecilia. If we were to consider it genotypically, we’d have to test it thoroughly in a laboratory. So let’s focus on the phenotypic traits. Endler’s livebearers are smaller than guppies. Males grow to about 2,5 cm and females to about 4-5 cm. Their bodies have a tiny structure. The tail fin is oval in shape, short, possibly decorated with an upper, lower or double sword. Sometimes fins are partially colored. As for Endler’s livebearer females, they are grey or olive-grey. In short, monochromatic. Tail fins in this species are never colored or patterned.

However, male rainbow fish have more patterned fins, both caudal and dorsal. There are many standards of tail fin shape in breeding forms. Fish are divided into long-finned, short-finned and swordfish. Females of Poecilia reticulata are much larger than of Poecilia wingei and usually have a coloration and patterning on both caudal and dorsal fins.

The P.wingei ‘s tail base is much thinner compared to P.reticulata. The number of offspring is also much smaller compared to the guppy. This is related, among other things, to the size of mature females. Importantly, P.wingei females do not eat their own fry. The two species can intersect, which is very common.

We divide the Poecilia wingei species not by standards but by classes. There are three classes: N, P and K. Fish with a documented wild origin are marked with Class N. Class P is marked for fish that have phenotypic characteristics resembling or looking like wild fish but have no documented origin, whereas Endler’s livebearer crossed with a guppy is marked with class K. The resulting P.wingei x P.reticulata hybrids have a different structure. The males are bigger than Endler’s livebearers and smaller and more bulky than the guppies. Tail fins are longer, dorsal fins are also more patterned. Females usually have a pattern on their fins.

Wild phenotypes of the Endler’s livebearer (classes N and P) have digits in their names. What do they mean? Hobbyist classify wild fish depending on the region where a specific variety was caught. That’s why the use names such as Poecilia wingei Campoma… or Poecilia wingei Cumana.

In addition to the location in the nomenclature, numbers, dates and names appear, e.g. Campoma 29 (2016, P. Voisin). This means that the phenotype was caught and described by P. Voisin, who gave him a specific number according to his segregation and cataloguing system. Date means the year in which this form was described and captured.

Collecting these fish for me as their owner, the most important thing is to keep each variety in clean lines. I keep each variety in a separate tank to preserve its genetic purity. This is extremely important because in the natural environment many of the reservoirs where Endler’s livebearer is found dry out and it may happen that in the natural environment the variety dies out. Therefore, hobbyists may be the only option to rebuild the population in the wild by donating fish from their farms.

I hope I have managed to bring you a little closer to this beautiful gems from Venezuela. Thanks for the time you took to read it.