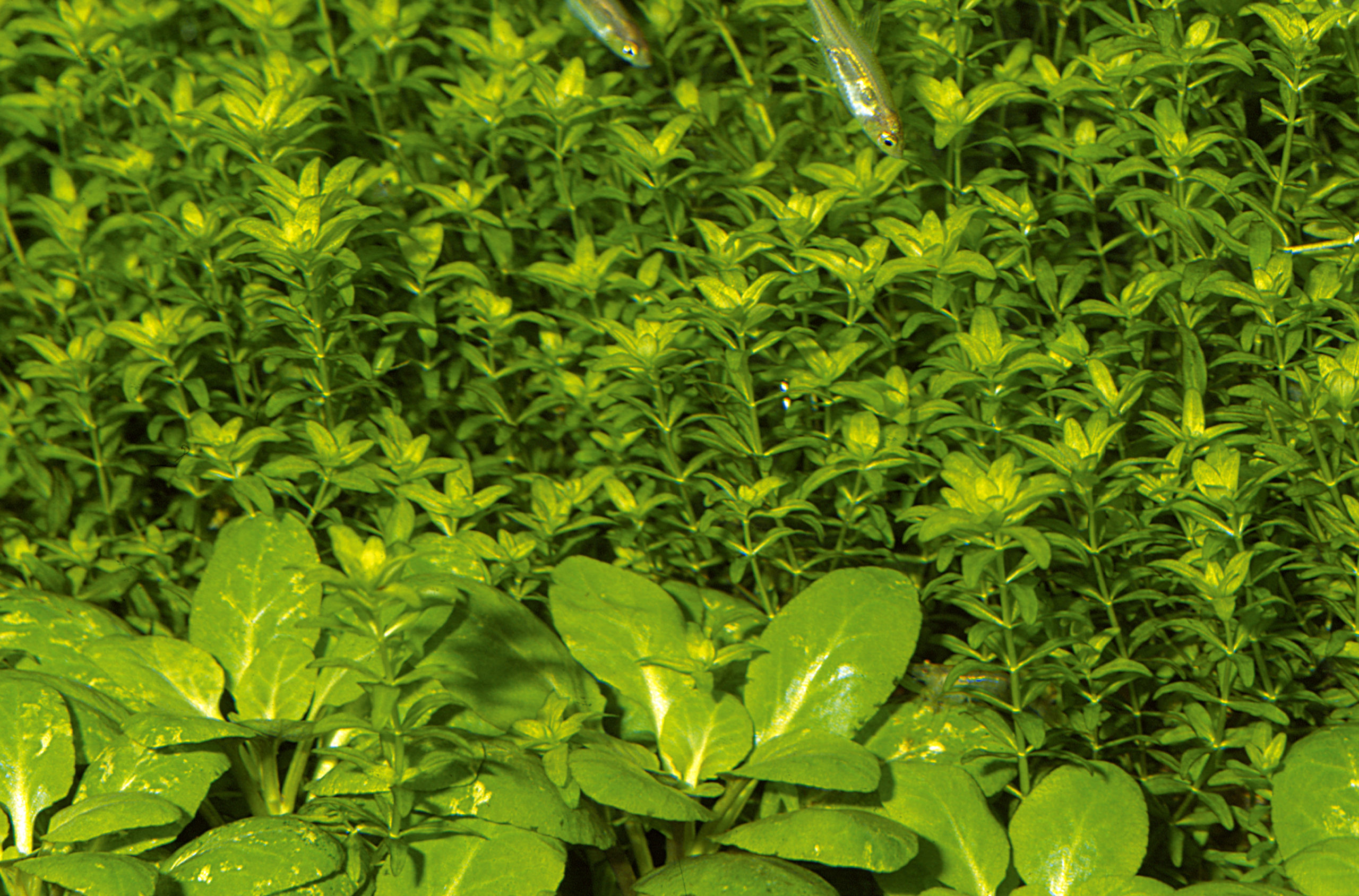 Over time calcium deposits will appear in every home aquarium. They most often form on the edges of glass, at the places where water surface meets the air, and on the leaves of plants. In case of soft water, the problem is minor, but in case of hard tap water present in many regions of Poland, calcium deposits in an aquarium may give aquarists many sleepless nights. While in the case of water evaporation from the tank white deposits appearing on the edges of the glass are a completely obvious phenomenon, why do deposits also appear under water? What’s the reason?

What calcium deposits are?

What is commonly referred to as “lime scale” is nothing more than a mixture of calcium salts, which are difficult to dissolve, rarely magnesium (and exceptionally iron), so the components that directly affect the hardness of water. Water, like any solvent, has a limited capacity for different substances. The more difficult a compound is to dissolve, the less we can dissolve it at a given temperature. So are the sediments caused by an increase in these salts? Where do they come from if no one usually intentionally adds them to water?

The role of photosynthesis in calcium depisits formation

Photosynthesis, which everyone has heard of, is the basis of plant development. No doubt, it takes energy. In nature, everyone competes for energy and tries to obtain it in different ways. The plants have chosen a method in which they become virtually self-sufficient in the presence of a carbon source and sunlight. As much as we can freely change the light output in each aquarium by adding or subtracting the number of fluorescent tubes, it is not so easy with carbon dioxide (CO2). Every aquarist who wants to have a kind of garden in his home tank must sooner or later decide to feed it with CO2.

The forms of CO2 in water vary greatly depending on the pH of the environment. And so in waters with a pH of 4 – 5 we can find only the dissolved, gaseous form of CO2. Above this value, in the pH range 5 – 12, carbonates and bicarbonates coexist along with the gaseous form. The latter have buffering abilities (stabilizing the water reaction) and it is on them that we will focus in this article. Above pH 12, only carbonates are present in the water.

It is easy to conclude from the above that in 99% of home aquaria, where the pH value usually oscillates in the range of 6 – 8, the CO2 gas administered by us is present in the tank in small quantities. Because most instantly combine with water to form an unstable carbonic acid (H2CO3), which dissociates into an H+ ion and a bicarbonate ion, HCO3–.

In case of aquariums with a lot of plants, a deficit of dissolved CO2 becomes apparent very quickly. Therefore, plants are forced to look for other sources of it.

Bicarbonates are very water-soluble salts with the structure MeHCO3–, where Me stands for metal (e.g. Ca, Mg, Na, K). They are responsible for the so-called “transient hardness” and the HCO3– ion formed after dissolving bicarbonate in water is nothing but a compound of CO2 and H2O. Such a common reservoir of carbon dioxide, which, unlike dissolved gas, will not easily “escape” from water, is an obvious choice. Some plants have mastered this process to perfection and we call it biogenic decalcification.

Biogenic decalcification (found in plants) was first described by Kaj Sand-Jensen and Henning Frost-Christensen. They made their observations on a shining pondweed (Potamogeton lucens). In our conditions, the easiest way to see this phenomenon is on a Canadian waterweed, which is much more common. This process results with calcium deposits on plant leaves.

On the underside of the leaf a shining pondweed secretes H+ ions (responsible for lowering the pH; they are abundant in acidic environments), locally lowering the acidity to approx. pH 6.0. Under these conditions, the bicarbonates present in the body of water are converted to the pure form of CO2. This gas diffuses into the plant and is used there for photosynthesis.

Of course, the H+ ion did not come from nowhere – it was taken up by the leaf surface. This caused an electrolyte imbalance at this site and a higher concentration of OH– anion was locally produced, leading to a pH of approximately 10.0. Under these environmental conditions, bicarbonates are converted to CO32 carbonates, which are immediately precipitated. This process is observed on the leaf blade in the form of a white coating.

Calcium deposits that appear in this way are an important indicator for any aquarium owner that they need to stay alert. Providing plants with the right amount of light and fertilizer is not enough for proper growth. Because they often have to waste valuable energy to carry out a process that they mostly do not need in a CO2 fed aquarium.

Decalcification, potentially harmless, brings with it one very serious problem. With every loss of pH buffers (which are bicarbonates) we expose the tank to fluctuations of this parameter. This can lead to health problems in the fish and eventually to inhibition of plant growth. Is the problem serious?

Research has shown that in an alkaline environment, where the vast majority of carbon dioxide is stored as bicarbonate and used entirely during the day for photosynthesis, pH fluctuations between day and night can be as much as 4 – 5 degrees. Note that the pH value by definition is the negative logarithm of the hydronium ion concentration, i.e. -log [H3O+]. According to it, a change in pH as little as 1 degree is a change of a whole order of magnitude! Such large fluctuations are extremely dangerous for a closed ecosystem such as an aquarium and will certainly cause significant losses among the tank’s fauna in the long run.

The solution to the problem, when you don’t have an external source of CO2, seems to be to continually increase the bicarbonate content of the water by continuously dosing it to not allow the pH to fluctuate. Unfortunately, once a certain limiting amount is exceeded, photosynthesis will be inhibited. The efficiency of the process itself is also an obstacle. The results indicate that plants utilize CO2 and bicarbonate in a 10:1 ratio in terms of efficiency. This means that even plants naturally occurring in alkaline environments, for which biogenic decalcification is a necessity, show significantly greater growth when CO2 is present in the water.

An aquarium is a fascinating environment in which we observe changes, growth, and sometimes reproduction of fish and other inhabitants on a daily basis. We can notice something new every day, and every day brings new knowledge and experience.

How to adjust the pH of the aquarium water

The pH buffers in the aquarium